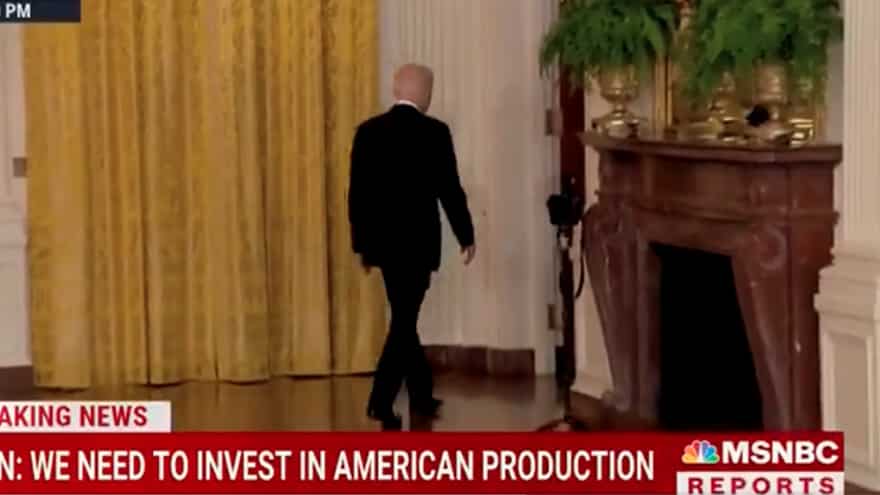 President Joe Biden refused to take questions from the White House Press Pool Wednesday after delivering an address on a breakdown in the nation’s supply chain; abruptly walking-away at the conclusion of his remarks.

“Thank you, and may God protect our Troops,” said the Commander-in-Chief as reporters shouted after him.

“The cost of meat is related to competition and the small number of large-meat producers who have a dominance over the market… A lot of these issues aren’t as simple as a one sentence explanation,” she added.

“We all understand the American people are not looking at cost-to-cost comparisons from this year to two years ago,” she added.

Psaki answers a question about inflation: “We all understand the American people are not looking at cost-to-cost comparisons from this year to two years ago.” pic.twitter.com/ZIxxKhRUg9

The number of Americans voluntarily leaving their job rose to a record high in recent days, climbing to 2.9% as the country struggles to rebound from the COVID pandemic and increasing inflation.

“Industries that saw the largest decrease in the number of job openings include health care and social assistance (-224,000), accommodation and food services (-178,000) and state and local government education (-124,000). Job openings increased in the federal government (+22,000),” reports Fox News.

The national price for a gallon of gasoline rose to $3.21 Wednesday, reaching a new high for 2021 after steadily increasing from $2.18 on Inauguration Day.

Experts predict the cost will likely reach $3.30 by the end of October.

60% of the POPULATION? Biden Says ‘200 Million People’ Have Died in the US from CoVID

Former Vice President Joe Biden continued to baffle millions of Americans Sunday when discussing the Coronavirus pandemic in the country; falsely asserting “200 million people” have died in the USA from CoVID-19.

“It’s estimated that 200 million people will die, probably by the time I finish this talk,” said Biden.

Joe Biden: “It’s estimated that 200 million people will die, probably by the time I finish this talk.”

Nearly one million people have died from CoVID-19 around the world since the outbreak began earlier this year; including 200,000 in the United States.

AXELROD ON BIDEN: ‘He Either Can Cut It, Or He Can’t’

Democratic strategist David Axelrod weighed-in Thursday on Joe Biden’s potentially reduced campaign schedule; saying “this is bad advice” and claiming the former Vice President can “either cut it or he can’t.”

“This is bad advice. You can’t cloister the candidate and win. He either can cut it or he can’t, and the only way he can prove he can is to be an active and vigorous candidate. He’s running for president of the United States, for God’s sake!” posted Axelrod on social media.

This is bad advice. You can’t cloister the candidate and win.
He either can cut it or he can’t, and the only way he can prove he can is to be an active and vigorous candidate.
He’s running for president of the United States, for God’s sake!https://t.co/SCZmqVYapF

Allies and political insiders close to Joe Biden are reportedly telling the former Vice President to scale back his campaign stops and speaking events; hoping the reduced schedule will minimize future speaking gaffes.

“Allies to Joe Biden have been floating the idea of altering the former vice president’s schedule in an effort to reduce the gaffes he has made in recent days,” reports The Hill. “The allies, growing increasingly nervous about Biden’s verbal flubs, have said it’s an approach that’s been suggested to campaign officials on the heels of the former vice president’s stumbles.”

“He needs to be a strong force on the campaign trail, but he also has to pace himself,” said one insider.

“I think you’ll see the same schedule and maybe even more Joe Biden,” one ally said. “Everyone wants to see Joe Biden be Joe Biden. If he’s held back in any way, that’s almost the antithesis of who he is.”

“I think it’s the wrong approach,” they added.

“Joe Biden has spoken his mind his entire life, which voters know and love about him,” said Biden’s deputy campaign manager. “He’s a real person, he’s authentic, and that will never change. He’s going to keep taking on Trump and making the case to voters about the stakes we face in this election, regardless of how the press chooses to cover him.”

Tarek El Moussa and Heather Rae Young have officially tied the knot, TODAY can confirm.Their wedding ceremony was held outside in Santa Barbara, California, in front of…

KERRVILLE, Texas (AP) — A driver lost control during a Texas drag racing event on an airport runway and slammed into a crowd of spectators, killing two…

BOGOTA, Colombia (AP) — Colombian security forces have captured the country’s most wanted drug trafficker, a rural warlord who stayed on the run for more than a…

Most from this category

Turkey’s Erdogan orders 10 ambassadors to get out, including U.S. envoy

KERRVILLE, Texas (AP) — A driver lost control during a Texas drag racing event on an airport runway and…

The body of five-year-old Elijah Lewis was found in a state park in Abington, Massachusetts, on Saturday, according to CBS Boston. The…

Turkey’s Erdogan orders 10 ambassadors to get out, including U.S. envoy

What scandal?! Dave Chappelle sells out London show, hints at US tour

Despite the ongoing controversy surrounding his Netflix special, Dave Chappelle closed out a six-night run in the U.K. with…

For the second weekend in a row, an HBCU homecoming has ended in tragedy as one man was killed…

A shooting early Saturday morning has left one person dead and seven others wounded in Fort Valley, Georgia, the…

There's been a coronavirus outbreak aboard a deployed US Navy aircraft carrier, and at least 25 sailors have it

Little things no one tells you about Guitar

It's not just Donald Trump. Immigration agencies and officials also use language of hate.

10 Bad habits and the best ways to quit them

Solo surf travel: How to plan a Solo Surf Trip